loopyker's #CBR4 Review #13: True Strength: My Journey from Hercules to Mere Mortal and How Nearly Dying Saved My Life by Kevin Sorbo 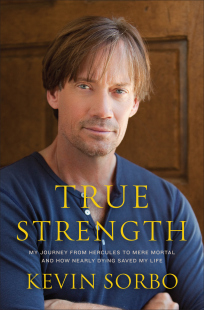 OK, I admit that I kind of had a crush on Kevin Sorbo during his Hercules:The Legendary Journeys days. I've always had a weakness for tall guys with long hair - but, he also seemed like a decent guy when giving interviews. I hadn't really thought about him in years, but was extremely disappointed to find out recently that he is now into some of the more extreme Christian fundamentalist propaganda  . It didn't seem to fit with his past public image, so I was curious. In looking him up, I discovered that he had a serious illness and had written an autobiographical book  about it. “Aha!”, I thought. “That might explain the extreme religious views.”

I was pleased to discover that my online library had the audiobook of True Strength, narrated by Kevin himself and his wife, Sam Sorbo.  I hoped to find an explanation for this fundamentalist approach in this book. I was disappointed in that respect, but really enjoyed and connected with the book in other ways.

We all know we are mortal, but many of us like to forget about that at different times in our lives. Kevin Sorbo probably wasn't thinking of it too much when he was in peak physical condition and playing the half-god, Hercules on one of the highest rated syndicated television shows in the world in the 1990's. But, he was was forced to confront that in a sudden, terrifying way. Unknown to all but his closest family, friends and co-workers, at this peak time, Kevin suffered three strokes after an aneurysm in his shoulder caused clots to travel through his body. These resulted not only in damage to his arm, but both long lasting and permanent symptoms such as partial blindness, dizziness, weakness, headaches and ringing in his ears just for starters.

This struck while on hiatus from Hercules, between the 4th and 5th seasons, just after the release of Kull the Conqueror (1997). It was at a crucial point, both in his career and for the continuation of Hercules where a lot of other people depended on Kevin as the star to keep the show going. Hercules hadn't yet reached that magic 100 episode number for the best syndication deals. But fortunately, everyone had a little time to figure things out before filming began again - and it took a lot of creative solutions.

It's been a long time since I've seen Hercules, but I still can remember when the writing suddenly changed with Kevin missing in strange ways - like one episode where he had been turned into a pig or was missing altogether. At the time, I was annoyed at the writing. Now, after reading True Strength, I'm amazed they pulled off hiding Kevin's recovery and disability so well! I found it really interesting to hear about all the little tricks they did to make it look like he was there more than he was and what they used to hide his weakness. He went from doing many of his own stunts to needing a body double to even lift a sword for awhile. He was never able to return to doing even many of the previously easy-to-him stunts.

Besides relating to True Strength as a fan of Hercules and then Andromeda, I very much connected with the personal struggle Kevin went through with his sudden disability. I couldn't be further away from the TV business, or the physical fitness enthusiast Kevin was. But, as someone who became disabled after a car accident, I could relate to a lot of the things he felt and encountered - from the broader implications of not knowing what you are going to be able to do with your life, to the little strange things like developing random food allergies.

I too was knocked down at a high point in my life. It doesn't matter how much money you have or how famous you are - it is the same process of discovery to figure out what exactly happened to your body and what is your “new normal” state mentally, physically and emotionally - and then what to do to move forward with all of that.

Like many people, Kevin had a tough time with his doctors. Some dismissed his symptoms and thought he should get better quickly, while others said the opposite. It became a struggle to know who to trust and believe and to know when to trust and believe his own body too. It is hard enough for us “regular” people to work through this just with ourselves and our families. Kevin had to go through all of this while presenting a public image of a demigod. He had been so good at doing this before his strokes that even doctors and emergency care workers afterwards weren't always taking him completely seriously because he was Hercules.

I read a review of True Strength that criticized Kevin as just a whiner - that he had lots of money to afford doctors and alternative treatments etc. when this particular disabled reviewer didn't. I think they are missing the point of the book. Yes, he had it easier than many people in some ways. But, as I said above - money doesn't really matter when it comes to the internal, personal struggle you go through. Kevin openly admits there were times when he got self-absorbed and depressed and took it out on people like Sam. I think it would be a very rare person indeed who didn't experience that at some point with a big life adjustment like that. It is refreshing to see a real portrait of that kind of roller coaster rather than the myth that disabled people are only inspirational and good people if they are passive, meek and grateful just to be alive and for any charity they receive.

That view of the disabled is perpetuated to make the the charity givers feel good about themselves. It does not treat the disabled as well-rounded human beings - and that is why I am very happy that Kevin Sorbo wrote this book! His celebrity can make other people think about disability in a way that the average person can't. Hopefully, in a way that also makes them more compassionate towards us.

True Strength is an inspirational book. As a disabled person it is good to see that even celebrities deal with the exact same things as we do and that they can rebuild successful lives, both personally and professionally.

Back to the original reason I listened to this book - Kevin's Christian fundamentalism. He talks about coming to terms with his faith in the book, but I didn't really pick up on how he got to the more extreme views. In fact, he talks about some decidedly non-fundamentalist views about things too. I still suspect the strokes had an impact on his more extreme beliefs, but this book is more about Kevin as a whole person and at an earlier time in his faith, so there were no good answers about that.

As an audiobook, Kevin and his wife were excellent narrators and it made the book more personal. It was one of my favourite books of the year and I highly recommend it in audio or print version.