I've watched exactly one full episode of Katie - the Katie Couric show. I heard that Jenny Lawson, aka The Bloggess was going to be on an episode, so I had to watch it. Brené Brown happened to be the main guest on the same show and she made such an impression on me that I immediately convinced my boyfriend to buy me her book, DaringGreatly: How the Courage to Be Vulnerable Transforms the Way We Live,Love, Parent and Lead. 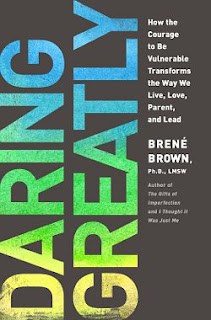 So, I took a little break from my usual fiction books to read this research-based, self-help type of book. It took me a little longer than usual to get through it - not because I wasn't interested, but because I had to keep stopping to make notes on post-its and discuss things that I found interesting with my boyfriend. He hasn't read the book himself yet, but he probably knows what half of it says already from me! So, this book just had to jump the queue in my ever growing, waiting-to-be-reviewed book list.

I think virtually everyone can see themselves and others in at least parts of this book somewhere. I found meaning in so many sections of it, that I did something I've never done before - I bought it for someone else before I even finished reading it (two people actually, with the help of my boyfriend). I also recommended it to others - and still do.

This isn't a touchy-feely self-help book. Brené Brown is always referring to her research, in a way that the scientific mind in me appreciates, but she still makes it very accessible to non-researchers by relating it to every-day people and situations, including many from her own life. For a short version of her style and some of the topics covered in Daring Greatly, check out the video of her very popular 2010 TEDxHouston talk, ThePower of Vulnerability , which she performed before writing this book.

If you like that Ted talk and you want to hear more, then read Daring Greatly as soon as you can! I will be rereading it for sure. It is the type of book that will mean different, but still meaningful, things to you when you reread it, depending on the personal struggles in your life at the time.

I made so many bookmarks that I don't really know what to pick to say for this review. I can't pick just one quote, so I won't even try. You can check out the book's site for that kind of thing. What spoke to me overall, is the idea of how we are in a culture of “scarcity”, thinking we aren't “enough”, that we are failing somehow as a person - physically, emotionally, financially - whatever, and how that leads to fear, shame and guilt, withdrawal/shutting down, and in worst cases, even addictions or lashing out. But, in the end, we need to be brave and let ourselves be vulnerable, whether what we do is successful or not, because that is the only way to fully experience life and joy. We can't shut out just the bad stuff selectively. When we try, we shut out the good stuff too. We need to learn to face things, and work through things to be happier and less stressed and to feel loveable and worthy of belonging and love. And in all of this, I also found her findings about some gender differences especially eye-opening and thought provoking.

In Daring Greatly, Brené Brown doesn't present things in the unrealistic positive thinking attitude that so many self-help books like to get stuck on. These are hard issues for people. Brené herself needed help to work through it in her own life, as you will have heard in the TED talk. The goal isn't to never feel fear, shame or inadequacy or to be 100% happy all of the time. The goal is to recognize what you are feeling, when you are feeling those things and to learn how to feel them and deal with them in a constructive way so that you can be the person you want to be, for yourself most of all, but also for your relationships with your significant other(s), your children, your co-workers and your community. It isn't always a comfortable process, but that is OK. That is normal and healthy and a part of living.

I really can't think of any adult I know who couldn't benefit from this book at some level. I would be surprised if people couldn't related to at least part of Daring Greatly and I highly recommend it for everyone. It can truly be a life-changing type of book to those who are open to it.

DaringGreatly: How the Courage to Be Vulnerable Transforms the Way We Live,Love, Parent and Lead
Author:  Brené Brown

Brené Brown, Ph.D., LMSW is a research professor at the University of Houston Graduate College of Social Work. She has studied vulnerability, courage, authenticity, and shame for more than a decade and has had her research featured on PBS, NPR, CNN and more.
Reading level: Ages 18 and up
Hardcover: 256 pages (also available in Kindle and audio versions)
Publisher: Gotham (September 11, 2012)
ISBN-10: 1592407331
ISBN-13: 978-1592407330

I didn't see this until after I had read the book. It looks useful to me though for people who like this kind of thing:  Daring Greatly Readers Guide (PDF)

Posted by Loopyker at Wednesday, December 19, 2012