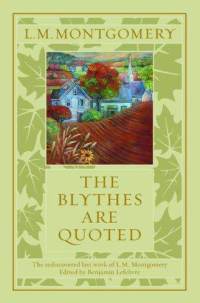 I was excited to finally get to this after having been a fan of the Anne of Green Gables series for as long as I can remember.  The Foreword says, "The Blythes Are Quoted is the last work of fiction the world-famous author of Anne of Green Gables prepared for publication before her untimely death on April 24, 1942.... The typescript was delivered to Montgomery’s publisher on the day she died—by whom we do not know; Montgomery evidently intended it for publication, since it is amended in her hand-writing."  This is the first printing that includes Montgomery's entire manuscript.  It is speculated that earlier printings removed some things that were felt to be anti-war at a time when patriotism was heavily favoured.

I had read enough about this last book beforehand to know to expect something very different.  That certainly was the case.  Calling it "Book 9" in the series, is really only because of when it occurs chronologically and that the Blythe family is connected in some ways.  However, if you expect a continuation of the stories in the vein of the rest of series, you will be disappointed.

Rather than a novel following the Blythes as they grow up, this book is a compilation of short stories and poems.  Most of the short stories are about people unrelated to the Blythe family who gossip about the Blythes at some point to keep that connection to Anne.  In true gossip fashion, some of it is true and some not, but if you know the rest of the series you will know which is which. Sometimes a family member is also a very minor character.  The poems are scattered in the gaps between short stories and are mostly attributed to Anne in little scenes of discussion about the poem and family with Gilbert and the beloved family housekeeper, Susan.  The others are attributed to Anne and Gilbert's middle son, Walter.

Even though it is not a true continuation of the series, it makes the most sense to read this after the others in the series to know who the Blythe family is when they are mentioned and to understand the grief of the family that is mentioned when talking about a lot of the poems.  You have to be paying close attention though to get the details about marriages and grandchildren that are scattered throughout.

For that matter, I really recommend reading the whole series in order to see how Anne grows up.  Montgomery's development of Anne from a young, impulsive girl to a mature woman who has been through great joys and sadness and sees herself in her children as they grow in turn is one of the best things about the series.   (although, I have to say that Rilla of Ingleside  is the book least about Anne, but is my favourite as the children are forced to grow up quickly with the start of WWI.  It is also educational to someone who doesn't know much about Canada's involvement in the Great War and what it was like for the women)

Other people had mentioned this being a darker book, but I didn't feel that as much as I was expecting from those opinions.  I took it in the context of the characters who have been through WWI and are in, or near WWII, like the author herself.  There are certainly some darker, human emotions such as bitterness and dwelling on death and grief, but there are still the familiar themes of gossip and long-lost loves throughout.  If you are familiar with L.M. Montgomery's other work, you will not be surprised by many of the outcomes.

I am not a big fan of "Anne's" poetry.  I admit to having trouble focusing enough to tell the difference between a lot of them.  Familiar themes and style run through many.

Overall, I was disappointed in that I wanted to know more about the Blythe children as adults and that will always be unfinished now.  Despite being a big change in organization style, The Blythes Are Quoted is still very recognizable as L.M. Montgomery and I'm happy to have read it for that reason.   Not a favourite by her though.