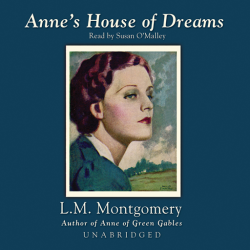 As I mentioned in my review #10 , I am a fan of the Anne of Green Gables series and have read them many times.  This was the first time listening to an audiobook version of one of them.

Having grown up with the TV series where Anne is played by Megan Follows it is hard not to compare the narrator of an audio version to her.  It's especially hard when at times, this narrator, Susan O'Malley, did actually sound like Megan.  But, it was a Megan without the "joy" that the real Megan has in her voice. (and still does when I've seen her as a guest star on numerous TV shows) .  Susan's voice was better suited to the sadder parts of House of Dreams, of which there were ample.  But her voice grew on me by the end of it.

I don't feel that House of Dreams is the strongest book in the series, but it is an important book.  Here Gilbert and Anne are finally starting a life out on their own.  Gilbert has his own medical practice and Anne is a new wife as they move to their first house and eventually start their own family.  It is a time of many changes.

Gilbert and Anne are meant for each other.  But that doesn't mean they don't have their own sorrows along the way.  House of Dreams is more somber than the preceding books in the series.  But, it is an important development for Anne to work through her latest grief and transition to full womanhood/motherhood.  In typical L.M. Montgomery style, the reader is prepared ahead of time for the sad parts, but it doesn't lessen their emotional impact at all.