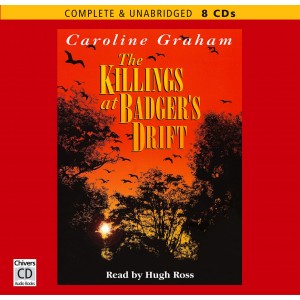 If you've seen the British TV show, then you know that Midsomer Murders follows the investigations of Detective Chief Inspector Tom Barnaby and his younger sidekick Sgt. Gavin Troy, around the quaint little villages in the English countryside .  These are slower paced murder mysteries when compared to typical American shows.  Runtime per episode is 100  minutes.  If you find these too slow-paced for you, then the 8-13 hour or more length of the audio books won't be to your taste.

Compared to the TV show, I found both the Barnaby and Troy characters less likeable.  DCI Barnaby was missing that subtle, warm humour portrayed so well by actor John Nettles  and similarly, Sgt. Troy was missing the sweetness to his inexperienced bumbling that Daniel Casey (and later Jason Hugh as DS Jones) brought to the roll.

The narration and most character voices were read well by Hugh Ross, however some of the voices for the more flamboyant characters were exaggerated in a way that made them difficult to understand at some points.

Since I started writing this review, I have seen a couple of the more recent Midsomer Murder epidsodes where John Nettles has left and has been replaced by his cousin with the convenient name of DCI John Barnaby, played by Neil Dudgeon.  I'm glad that I saw this after listening to the audiobook.  It makes this new TV DCI Barnaby character more understandable.  I feel like he is much more like the original DCI in the book version of Badger's Drift.  Similarly, and unfortunately for the sidekick - now DS Ben Jones, played by Jason Hugh, they seem to have made his character more immature to have the relationship between the DCI and his underling closer to the book, instead of looking like he has gained some experience working with the first DCI Barnaby.   I am curious to see if the sidekick character develops better in both the TV show and books in the Chief Inspector Barnaby Series.

As for the story, it is a traditional type of murder mystery.  An elderly spinster sees something she shouldn't have and gets killed to hide the secret.  DCI Barnaby has to figure out if it was in fact a murder, and if so, then what was the motive?  There is a little more adult content in this then in the TV show - enough that I made a note to mention it, but not enough that I can remember specifics now.  I don't like to say much about the plot or characters since it is a mystery.