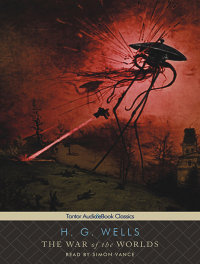 I'm sure I'm not the only one whose only previous experience with H.G. Wells was the 2005 War of the Worlds movie  starring Tom Cruise and Dakota Fanning and the character on Warehouse 13 .  While the movie was entertaining, it had the usual Hollywood dramatic scenes with the hero fighting to protect their family, where everything is frantic and full special effects.

With that in mind, I found the audiobook refreshing.  It has a much slower start than the movie.  The aliens don't just pop up out of the ground.  Strange objects, apparently from Mars, land on the earth and are later reveled to contain aliens - Martians.  We don't know at first if they are friendly or malicious.  They construct their tripod killing machines while people watch and wonder.

When the machines are operable, their destruction of humanity and civilization begins.  Of course, this is a time before cars, so people are fleeing by foot and horse and buggy and they don't have access to instant news or telephones like we do which makes for even more confusion.  Everyone is on their own.

One of the best parts is that the main character has no children and is not looking after any children.  I found this a nice surprise after so many of today's movies are made to manipulate our heart strings by making it all about the children.  Instead, the man has a wife, who he gets separated from in the early stages and spends most of the book not knowing if she is dead or alive.  The story is about his survival and the random people he encounters and how everyone is dealing with this stress of attack and survival differently.

I am very glad to have finally heard the original.  There is a reason why there are many adaptations of The War of the Worlds - it is just fundamentally a good and compelling story.  Some things are understandably dated, with the idea of "Martians" probably the most jarring to today's readers.  But other elements from its time period make it even better.  The 2005 movie gave us a very good visualization of how horrible the alien machines were which heightens the contrast between the alien technology and the simpler human resources.   When people are fleeing by horses, it makes their plight even more staggering than those experienced in the movie version.

I forget what the "enhanced" part of the audiobook was.  I assume there was music or sound effects at some point, but I can't remember if I felt they added or detracted from the story.  I just remember that I very much enjoyed the audiobook and story overall.