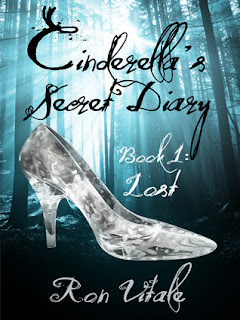 Disclaimer: This was given as a free e-book to interested CBR5 readers. This in no way influences the outcome of my review.
I was excited to accept the free e-book of Cinderella's Secret Diary: Lost since both young adult fantasy and the retelling of fairy tales are amongst my favourite genres and I'm always happy to discover more. This story also includes a little taste of historical fiction - another of my favourites.
As the title suggests, this book is written in first person from the viewpoint of Cinderella's diary a few years after her marriage to the Prince. They are very far from living "happily ever after" at this time and Cinderella is very unhappy with her marriage and her whole life in the castle where she is under great pressure to produce an heir for the Royal family. She is dealing with big decisions about her life, marriage and motherhood. Hints of political intrigue around England and Napoleon are also entwined with the magical elements of fairies and witches.
It all sounds great to me in theory, but fell short of my hopes in practice.
Personally, I have kept a diary at different points in my life. I use the writing to get my emotions out and organize my thoughts. Regardless of my age at 16 or 40, they inevitably end up as venting about some heartbreak of unrequited love or conflicts with friends and family. They are an emotional release and not intended as writings that would interest anyone else. The full first half of this book has exactly that feel. While I could understand Cinderella's frustrations, I did not feel connected to her and didn't even like her. (Just as I wouldn't really expect anyone to like me much if all they knew of me were pages and pages of my internal venting!) It was mostly just depressing. It also kept the other characters very two dimensional since they didn't have voices of their own.
It takes a lot for me to stop reading a book once I've started - I always hope it will get better. That rarely happens, but in this case it did. For the second half of the book, while confusing at times, the story got fleshed out more as Cinderella is actually working on improving her life, instead of just complaining about it. She grows as a woman, learning about herself and learning a little about the world - both terrestrial and magical. But it still lacks much depth.
This improvement was enough that I am willing to continue onto the second book in the series, Stolen, which was also provided as a free e-book for review. If I wasn't already given it, I would not have gone to the second one though, and it will not be a high priority to get to in my list now.
I'm really not sure if younger readers would appreciate the book more or not. The author designates this books as suitable for ages 15 and up. I read a lot of juvenile and young adult fantasy and it is my opinion that a good book written for these ages can be enjoyed by anyone older too.  Lost just doesn't hold up to that for me and I suspect many experienced readers of any age will tire of it before they get to the second half. But, it may be suitable for young adults who just want an easy read.
On a technical note, Lost could use some proofreading to fix up some spelling and grammatical errors. I'm not too bothered by that kind of thing, but there were enough for me to easily notice. I'm not the type of reader who usually notices errors unless I'm thinking to look for them, so I probably missed many more. However, I have also seen much worse by other authors and don't think the average reader will be much distracted with the current level of errors.
There are also a couple of lines that at first look like typographical errors, but are only backwards writing. This may be confusing for some less experienced readers. It also means that those lines won't translate to an audiobook, if that possibility was ever considered in the future.
For those really interested in fairy tale retellings with strong heroines, my opinion is that your time is much better spent on some of my favourites by Robin McKinley:  Spindle's End   (Sleeping Beauty), Rose Daughter  (Beauty and the Beast) and The Outlaws of Sherwood   (Robin Hood).