Elizabeth Peters (real name Barbara Mertz who also writes under Barbara Michaels), is best knows for her popular Amelia Peabody mysteries.  Those are amongst my favourite mystery books, but Elizabeth Peters has written many other books.  For this review I'm combining three of her other books that aren't any other series.  My feelings and criticisms are very similar for them all, so it seems pointless to write the same review three times.

While the Amelia Peabody series begins in the 1880's, these other books have contemporary settings, but are now out-dated having been published in 1968-1977.  Amelia is ahead of her time, but the women in The Jackal's Head, The Night of Four Hundred Rabbits and Devil-May-Care perhaps were modern in the early 1970's.  That's when I was born, so I'm not really sure.  However, for present day, they come across as annoying, old-fashioned and not as likeable as they probably were originally.  They fight against the constraints that society places on women, but then often end up falling into silly and frustrating stereotypes despite that. 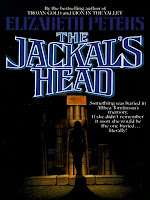 I listened to The Jackal's Head most recently.  Looking it up, it is the oldest one, which probably explains why I liked it the least.  It takes place in Egypt, a setting familiar to Peabody fans.  A young women returns to the place that destroyed her father's reputation and led to his death.  She masquerades as a tourist but meets childhood friends as she searches for answers to clear his name and her cover is quickly blown.   The eventual archeological finds go much more into fantasy than what I can remember from the Peabody series.

Surprisingly, compared to the other Elizabeth Peters books I can recall, there are two attempted rape scenes in The Jackal's Head.  They are kind of left ambiguous as to how far the attacker actually got.  I think we are supposed to understand that he didn't succeed, but in the first she is left unconscious and bruised.  I do not like reading/listening to sexual violence in books, so this was disappointing for me and I wasn't expecting it after being familiar with so many of her other books (Peabody and otherwise).  I suspect that this is a product of the time it was written.  If I recall correctly, Anne McCaffrey included a rape in an early fantasy story published around this time which she later regretted and changed in a rewrite when the short story became a full-length novel.  (and I can recall being very disappointed in that since I read the original before knowing about the rewrite)

Anyone familiar with Peters books will not be surprised at the ending of this book either. 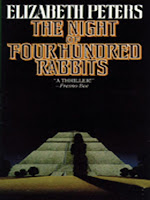 The setting is slightly different in The Night of Four Hundred Rabbits.   A young women travels to the pyramids in Mexico City in search of her missing father.  Again, this was disappointing for Peters.  There is a strong anti-drug message that is unexpected and lacks creativity.   I think this is one of the most dated of her older work and doesn't hold up well now.  I can't even remember anything remarkable enough to comment more specifically about now and don't even remember the ending.  I don't think I cared too much by then.

Refreshingly, Devil-May-Care, takes place in Virginia.  A young, wealthy woman house-sits for her Aunt and gets some much needed time away from her fiancé.  She unwittingly uncovers some secrets about the old families in the area - but she's not even sure what she found and everyone wonders if the strange things happening in and around the house are paranormal or real-world tactics to try to keep the secrets hidden. 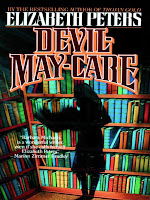 Out of the three books, this was the most recently written, and you can tell.  It still is not as strong as many of her other books, and a little too predictable but definitely better than The Jackal's Head and The Night of Four Hundred Rabbits.  In all cases there were instances where I was just rolling my eyes at the talks the women have with themselves about how they are modern women, while still having such sexist attitudes.

I don't recommend any of these if you have not already enjoyed Elizabeth Peters in other books.  I would only bother with The Jackal's Head and The Night of Four Hundred Rabbits if you really, really want to just read everything by Peters and don't expect much.

The audiobook quality and narration were good.  However, these might read better in print when you can skip quickly through the annoying parts.