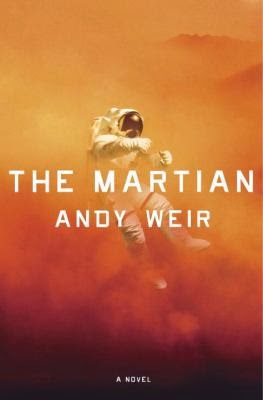 I can't believe it has taken me a month to get to writing this review.  I was telling everyone about it when I finished it, but just didn't get it written down.  I had managed not to hear much about this book beforehand.  I can't even remember where it was recommended so that I put it on my library hold list...and then waited months for it to come up since it was so popular.

, but with one person.  Some people say it is like Cast Away

, but it doesn't have that crazy edge.  While reading it, I kept thinking that it would make a good movie and when I looked, they were in fact already making the movie. It is scheduled to be out in November 2015.

The "Martian" is astronaut, Mark Watney, from Earth who accidentally gets abandoned on Mars after a failed mission.  A little food and a lot of equipment is left there with him.  But can he figure out how to survive all alone for the years it will take until the next mission arrives?

It moves from one problem-solving, crisis moment to the next.  I did not want to put this book down!  I also don't want to write spoilers.  I really didn't know what was going to happen from one minute to the next.

Mark is a very likeable character.  He manages to maintain a good sense of humour and practical outlook.  There is swearing in the book - often amusing.  But otherwise, not "adult" enough that most young adults couldn't read it too.

While there is a lot of math and science mentioned as he calculates how to ration supplies and make things work, you do not need to understand it, beyond getting an idea of the magnitude of the obstacles he has to face.   I really like how the problem solving progressed in a logical manner.  The crises didn't seemed forced or contrived.  The story might even inspire younger readers to value maths and sciences more with how credible all the creative solutions were - whether or not they really are.

Even though, it does read like a "Hollywood" version of this story at times, the way Mark does tests before just jumping into things makes it more believable.  The science is beyond me to judge for accuracy, but it is very entertaining even if there are problems with it as others have pointed out. And it is for this reason, that I think it has a much broader range for an audience than what people would normally think for science fiction.  Anyone who is remotely interested in space travel, real or otherwise can enjoy this as a an action adventure story.

Although "Mars" has become very popular lately, I don't think this book wasn't written to capitalize on that.  Weir has said that this started out as a hobby.  Just for his own amusement, he worked to figure out what a mission to Mars might look like and the problems that could happen.  This reminded me of many conversations I've had with my boyfriend where we get working out problems, just to think about them - except that Weir was super committed and then turned his enthusiasm into a great book.  His love and dedication to details really show to make a captivating read all the way through.

In some ways I really wish I had listened to the audiobook, since so many people have already reviewed the print/ebook version.  Although, I might have been aggravated by a slower pace with the audiobook and overwhelmed by the math details.  It would also have been harder to be on the edge of my seat listening, rather than reading.

While, I think it will be an entertaining movie, a lot of the book is inside the head of Mark - his problem solving and calculations, so it will be interesting to see how they deal with that without a Wilson-type character .  I suspect the book will be better. So go read it before the movie comes out and it becomes harder to avoid spoilers!

Title: The Martian: A Novel